By Kurt Schmidt In Blog, Everyday Career Advice On June 21, 2017

I’ve spent years telling job seekers that it’s okay to contact people who work in their desired field and ask their advice.  Doing research, identifying appropriate contacts, and sending short introductory notes is okay, no better than okay, it’s the best way to learn about real jobs, develop relationships and find opportunities.  It goes without saying that (almost) any real conversation a job seeker has with someone working in their field is more satisfying than sending resumes out into space.

Do people really reply?  Yes, sometimes they do.  Today, while scrolling through LinkedIn, I read a post by one of my contacts who received an invitation to connect and a nice follow up email seeking career advice.  His response (full text below):  He offered plenty of advice, gave out some contacts and accepted the invitation to connect.  Here’s a link to his original post – Check the comments too!

“I don’t post a lot but for some reason I feel compelled to do so now. Last week I had a young man send me a connection request which I accepted. Shortly afterwards I received a message from him asking for some help in getting started on a career in project management. It may sound silly, but I was flattered that this complete stranger would put his faith in me to guide him in the right direction.

I gave him some advice on how to get started and even suggested that he get involved with some of the local PMI chapters. In addition, I sent his profile along to a few recruiters I know and asked them to do what they could to help him. To me this was not a big deal and I was glad to help him out because I too was once looking for help.

A day or two later and he has received phone calls from some of the people I put him in touch with. He said that it really meant a lot that I took the extra time to introduce him to some of my recruiter contacts. He said that he asked over 150 people to help and most people didn’t even bother to respond. What?! Isn’t that what LinkedIn is supposed to be all about? Shouldn’t we be helping each other? What’s the point in accepting a request if you aren’t going to interact with that person? Come on people, have a heart and help your fellow man!

Everyone who has a job has had help from someone at some point in order to get there.  Most of them are aware of it and are happy to help someone else when it’s their turn to pay it forward.  It may not happen the first time you send an introductory email or LinkedIn invitation but if you persist and improve, good things will happen.  Note, it took the person in the post 150 tries before getting a reply.  While that number sounds discouraging, it is important to keep in mind the scale of the reward for all of that work:  A good job.

Kurt Schmidt is the author of “Modern Job Search” and the President and Owner of Capto Systems, an executive search firm focused on supply chain and strategic sourcing jobs in manufacturing and energy. He’s also an aspiring photographer and traveler.  If you’re really looking for a job, you need his book! 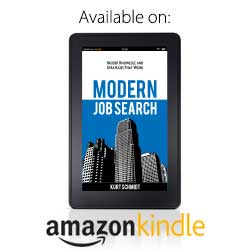