Veterans seem misrepresented in the media and it's not helping 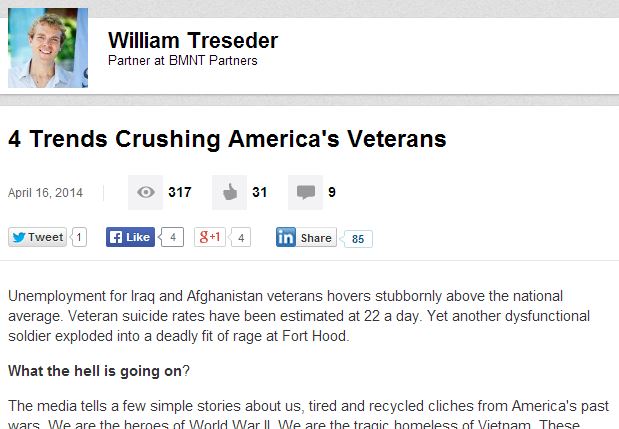 Last week William Treseder posted a very interesting article (Four Trends Crushing America’s Veterans) about how he feels the press is misrepresenting America’s veterans – to the detriment of their employment prospects.

He supports his premise by citing four “trends” that the media is hyping but are, upon further investigation, not completely accurate or are being sensationalized for the sake of the story. The blame, he suggests, is a lack of “critical thinking” on the part of the media and the tendency to generalize everything into one-size-fits-all type molds to describe the experiences of veterans leaving the military.  The end result is that the reinforcement of the trends that the media hypes perpetuates the very unemployment and re-assimilation issues that trouble some veterans making things worse.

Starting with the 25% base figure for veteran unemployment that the media often refers to, William shows that by digging a little deeper, the actual figure is probably a lot lower. The problem is that the media only refers to vets who are 18-24 year old, meaning in reality, vets, who after 4 years of service (from 18-22) only make up a two year span, have little experience outside the military and typically have not completed college.  William says that the actual number of unemployed vets is probably closer to 7% – which is better than the non-ex-military unemployment rate. He actually says that veterans are more likely to have jobs, which makes a lot of sense considering the level of discipline, loyalty and goal orientation that military service instills.

The remainder of the article goes on to use real data to show the discrepancies between what we are told and reality in an effort to shed some light on the actual problem in order to try to identify real solutions. Here are the four main fallacies that he describes:

Number one: That ex-military suicides are higher now than they used to be. William cites a 2012 VA study that shows the numbers as either stable or declining when adjusted for age ranges. Obviously it’s still a problem but not a spiking problem.

Number three: Less stability at home. William says that this one is true – that post military, more veterans get divorced than civilians and are in need of other support mechanisms.

Number four: Education is a large contributing factor to finding a good job. The military does a good job of supporting continuing education (GI Bill, etc.) but unfortunately the graduation rate for student veterans is only 51.7% This one does need improvement for sure.

In summary, William says that some of the issues are indeed real and that to better assist returning veterans, we need to break through the media hype and get to the truth. The truth as he sees it is that veterans can feel isolated, are more likely to end up divorced and need to pursue education more diligently in order to succeed.

If more people recognized the core true issues instead of simply going by the press reports, William suggest that the problems could be addressed much more effectively.

This hits home for me too since my father is a retired veteran who had to do a lot of self evaluation to find work after the military himself. Fortunately he was able to access opportunities and continue to work as long as he wanted to but that’s not the case for all veterans.